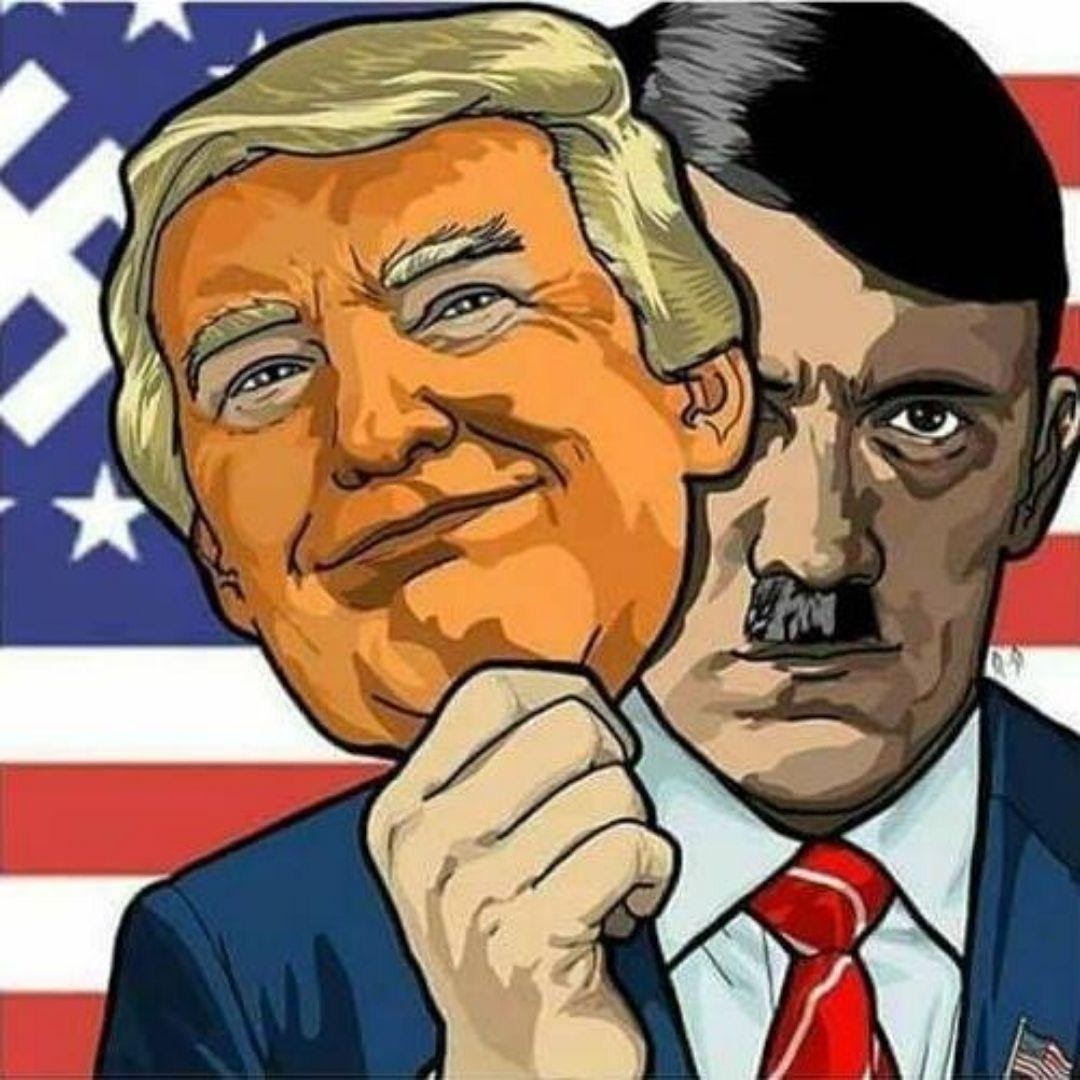 An employee asked why the company refrains from using its AI to kick white nationalists off the site. After all, Twitter had previously ushered a sweep of bans on accounts pushing Islamic State propaganda. The answer was unsurprising for anyone who’s ever perused Twitter: Content filters created to identify hate speech could potentially result in Republican politicians being banned, an executive explained.”
-Yahoo News

Usually, comparisons between Donald Trump’s America and Nazi Germany come from cranks and internet trolls. But a new essay in the New York Review of Books pointing out “troubling similarities” between the 1930s and today is different: It’s written by Christopher Browning, one of America’s most eminent and well-respected historians of the Holocaust. In it, he warns that democracy here is under serious threat, in the way that German democracy was prior to Hitler’s rise - and really could topple altogether.

Browning, a professor emeritus at the University of North Carolina, specializes in the origins and operation of Nazi genocide. His 1992 book Ordinary Men, a close examination of how an otherwise unremarkable German police battalion evolved into an instrument of mass slaughter, is widely seen as one of the defining works on how typical Germans became complicit in Nazi atrocities.

So when Browning makes comparisons between the rise of Hitler and our current historical period, this isn’t some keyboard warrior spouting off. It is one of the most knowledgeable people on Nazism alive using his expertise to sound the alarm as to what he sees as an existential threat to American democracy.

Browning’s essay covers many topics, ranging from Trump’s “America First” foreign policy — a phrase most closely associated with a group of prewar American Nazi sympathizers — to the role of Fox News as a kind of privatized state propaganda office. But the most interesting part of his argument is the comparison between Senate Majority Leader Mitch McConnell and Paul von Hindenburg, the German leader who ultimately handed power over to Hitler.”
-Vox


"Holocaust survivor on Trump: 'I've seen this before - in Nazi Germany'

"The first time I saw (Republican candidate Donald) Trump speak on television, I was shocked," said Eric Blaustein, of Lombard, "not so much because of what he said but the way the crowd responded to him."

"No matter what kind of outrageous things came out of his mouth, the people waved their hands and loudly cheered 'Hurrah!' " he told me, his eyes growing more serious "I have seen that before — in Nazi Germany in 1933."

Blaustein, who was the honored guest at this dinner, made a similar comment later while talking to Navy League members about his experiences as a child growing up in Nazi Germany and as a teenage Holocaust survivor.

As a man who's had a front-row seat in one of mankind's most ugly chapters, Blaustein is fully aware of how history has a way of repeating itself.

"This man frightens me," he said. "I watch what is happening. ... I can't believe this is America."
-Chicago Tribune


"I am a nationalist."
-Donald Trump (video)


If Albert Einstein was still around today, he would despise Trump. And Trump would give Albert Einstein a malicious nickname, like Low IQ Jew or something equally dumb... like he always does.

The same thing Trump tells you about liberals and brown people.

After taking power in 1933, the Nazis persecuted homosexuals as part of their so-called moral crusade to racially and culturally purify Germany. This persecution ranged from dissolution of homosexual organizations to internment of thousands of individuals in concentration camps. Gay men, in particular, were subject to harassment, arrest, incarceration, and even castration.”
-US Holocaust Memorial Museum


Nazi Germans didn't think of themselves as the bad guys in World War 2. Nazis thought they were the victims of a worldwide globalist anti-German conspiracy, controlled by Jews.


“How Did the Term 'Globalist' Become an anti-Semitic Slur? Blame Bannon

White supremacists have used the term as a barely concealed dog-whistle for several years, but the problem comes when it’s used in the ‘globalist vs. nationalist’ economic debate

The global anti-globalist: Steve Bannon comes out as proud 'racist' on his European comeback tour

Indeed, like the word “cosmopolitan,” the term “globalist” echoes the ideology of Adolf Hitler, who fomented against the Jews as “international elements that “conduct their business everywhere,” thus harming and undermining good people who are “bounded to their soil, to the Fatherland.”

Over the past two years, the disturbingly robust alt-right white nationalist movement online has used the term interchangeably with “Jewish” to promote the belief that Jews put greed and tribe ahead of country.

It has been a cornerstone of David Duke and Alex Jones’ conspiracy theories featuring George Soros and a fantastical Jewish conspiracy designed to destroy “white” or “Western” society by flooding it with third-world hordes – all the better to strengthen their control of banks, businesses and, of course, the media.


Nazi Germans honestly believed they were in a fight for their lives. And he was their savior. Their hero. Their messiah. And their survival was inseparably linked to his success.

In 1923, Adolf Hitler wrote an embellished autobiography to convince Germans he was their natural leader

But publishing such a self-aggrandizing portrait would have repelled Germany’s traditional conservatives, so Hitler searched for a writer with impeccable conservative credentials willing to pretend to have written the book.

Doing so would come with a double payoff: Hitler’s shameless act of self-promotion would be concealed, while the impression would be created that he already was in receipt of widespread support among traditional conservatives.

In the book, he put into the mouth of Koerber his own determination that he was “the leader of the most radically honest national movement […] who is ready as well as prepared to lead the German struggle for liberation.”

Hiding behind Koerber’s name, Hitler could get away with pronouncing himself Germany’s “messiah.”

His autobiography-in-disguise repeatedly uses biblical language, arguing that the book should “become the new bible of today as well as the ‘Book of the German People.’” It also directly compares Hitler to Jesus, likening the purported moment of his politicization in Pasewalk to Jesus’s resurrection.
-Smithsonian Magazine


That's how Hitler brainwashed his followers into being cult members who didn't care if he lied, or played dirty, or cheated, or broke laws, or invaded countries, or killed people.


Just like MAGA minions don't care if any of the things Trump is accused of are true or not. You think you must support him, right or wrong, to defeat the evil liberals who want to kill you.


“How Donald Trump Shifted Kids-Cancer Charity Money Into His Business

The best part about all this, according to Eric Trump, is the charity's efficiency: Because he can get his family's golf course for free and have most of the other costs donated, virtually all the money contributed will go toward helping kids with cancer. "We get to use our assets 100% free of charge," Trump tells Forbes.

That's not the case. In reviewing filings from the Eric Trump Foundation and other charities, it's clear that the course wasn't free - that the Trump Organization received payments for its use, part of more than $1.2 million that has no documented recipients past the Trump Organization. Golf charity experts say the listed expenses defy any reasonable cost justification for a one-day golf tournament.”
-Forbes


“President Trump argues he is above the law. A thousand prosecutors say he’s wrong

More than 1,000 former federal prosecutors had signed a statement explaining that, in their professional judgment and based on the facts described in special counsel Robert S. Mueller III’s report, President Trump would have been criminally charged with obstruction of justice if he were not the president.

This public outcry from such a large group of prosecutors - who have served under Republican and Democratic presidents - is unprecedented and indicative of overwhelming expert agreement on the evidence and law supporting charges against Trump.

Simply put, if you the reader or anyone else in the country had done what the president did, that person would be charged with a crime.

Mueller reached the same conclusion as the prosecutors who signed the statement: Trump obstructed justice. However, Mueller explained in both his report and his remarks that he could not criminally indict the president because of a longstanding department legal opinion that a sitting president cannot face criminal charges.”
-Los Angeles Times


Hitler's Nazi minions believed exactly the same things as you. They honestly believed that every terrible thing he did, he did in their name, and in their best interest. To protect them. To fight for them.


That's why they ecstatically cheered, when Hitler's right hand Goebbels asked the mob at a rally: "Do you want total war?”

They thought their own survival depended on Hitler's victory.

And that’s no coincidence.

"Ivana Trump told her lawyer Michael Kennedy that from time to time her husband reads a book of Hitler's collected speeches, My New Order, which he keeps in a cabinet by his bed ... Hitler's speeches, from his earliest days up through the Phony War of 1939, reveal his extraordinary ability as a master propagandist," Marie Brenner wrote.

Hitler was one of history's most prolific orators, building a genocidal Nazi regime with speeches that bewitched audiences.

"He learned how to become a charismatic speaker, and people, for whatever reason, became enamored with him," Professor Bruce Loebs, who has taught a class called the Rhetoric of Hitler and Churchill for the past 46 years at Idaho State University, told Business Insider earlier this year.

"People were most willing to follow him, because he seemed to have the right answers in a time of enormous economic upheaval."
-Business Insider

In a 1990 interview, the billionaire businessman admitted to owning Nazi leader's 'Mein Kampf' but said he would never read speeches”
-The Independent


"GOP strategist Steve Schmidt said Tuesday that President Trump's "only affinity for reading anything were the Adolf Hitler speeches he kept on his nightstand" during an appearance on "Morning Joe."
-The Hill