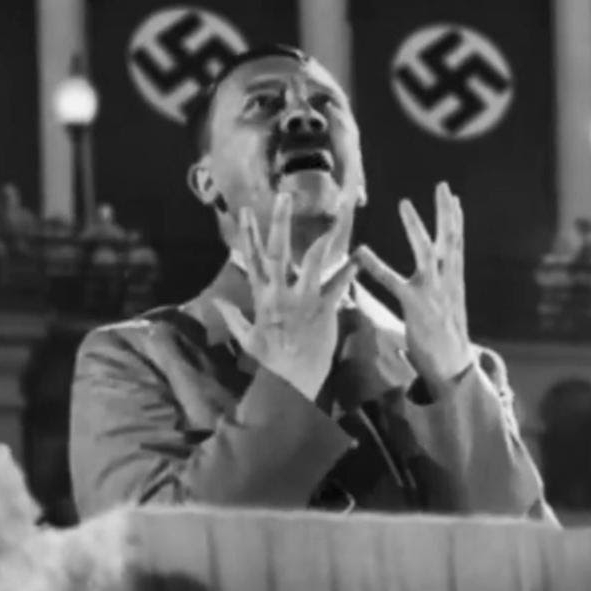 Hitler's speeches were just as theatrical as Trump's.

"The receptivity of the masses is very limited, their intelligence is small, but their power of forgetting is enormous. In consequence of these facts, all effective propaganda must be limited to a very few points and must harp on these in slogans until the last member of the public understands what you want him to understand by your slogan."
-Adolf Hitler


"All propaganda has to be popular and has to accommodate itself to the comprehension of the least intelligent of those whom it seeks to reach."
-Adolf Hitler


"The frailest woman will become a heroine when the life of her own child is at stake. And only the will to save the race and native land or the State, which offers protection to the race, has in all ages been the urge which has forced men to face the weapons of their enemies."
-Adolf Hitler

Hitler made his Nazi minions believe that evil barbarian hordes were a threat to Germany's survival, and that the white German race was facing extinction.


Guess who uses the same trick?


"Democrats want to destroy you and destroy our country as we know it."
-Donald Trump (video)

Trump’s savagely divisive political rhetoric, both as a candidate and as our 45th President, closely tracks the tropes that Adolf Hitler used from 1932-36 to persuade a critical mass of the German people to trade their democratic birthright for a Nazi pottage of xenophobia, bigotry, and scapegoats.

One key to Hitler’s success in talking German democracy to death can be found in the Holocaust Museum in Jerusalem, where two small green plastic cubes rest almost unnoticed on small display tables - surviving examples of the miniature radios distributed free of charge by the Nazi Party in the years following 1932. There was only one catch: the free radios received only a single frequency - the unremitting, unadulterated voice of Adolf Hitler spewing his witches’ brew of bigotry and hate directly into the heads of 35-40% of the German people.

Trump’s mastery of Twitter is the twenty-first century analogue of those green plastic radios, forging a direct line of unfiltered communication with 40 million Americans, enabling Trump to stoke mass fears and foment divisive anger on demand.

And it should not come as a surprise that Donald Trump is so adept at mimicking Hitler’s rhetoric. Trump studied at the feet of the master.

We know from Ivana Trump’s now-sealed testimony at Trump’s first divorce trial that the young Donald slept with a copy of Hitler’s speeches, published in English in 1941 as “My New Order,” on his bed-stand.”
-Forward


Well, to be honest, he's just picking the low hanging fruit that Republicans have been planting for years.


“How the Republican Party Became The Party of Racism

How white is the Republican Party?

According to Pew Research, 83 percent of the registered voters who identify as Republican are non-Hispanic whites. The Republican Party is whiter than Tilda Swinton riding a polar bear in a snowstorm to a Taylor Swift concert.

And not only is the Grand Ole Party unapologetically white, recently it has been disposing of its dog whistles in favor of bullhorns, becoming more unabashedly racist every day. Aside from its leader excusing a white supremacist murder, calling Mexicans “rapists,” referring to “shithole countries” and settling multiple discrimination lawsuits, there is an abundance of evidence that shows the party’s racism.

52 percent of voters who supported Donald Trump in the 2016 presidential election believed blacks are “less evolved” than whites, according to researchers at the Kellog School of Management.

In a 2018 YouGov poll, 59 percent of Republicans agreed: “If blacks would only try harder, they would be as well off as whites.”

Republican-appointed judges give black defendants longer jail sentences, according to a Harvard study released in May.

Nearly twice as many Republicans than Democrats (42 percent versus 24 percent) believe that blacks are lazier than whites, according to the same NORC poll.

There is not a single significant poll that shows Republican voters with lower negative feelings about non-white populations versus Democrats or independents. They have become the party of racism.”
-The Root


Hitler and Trump are fear mongers, who turn their frightened minions into disciples. They literally turn them into cult members, by making them believe that there is an evil conspiracy afoot that is about to exterminate them, and only the glorious leader can save them.


That's what the wall is all about. It's about protecting good white people from evil brown people. Evil barbarian hordes who want to exterminate you. And that's why you think Trump is your savior. Your messiah. Your cult leader.


"The Belief That Trump Is a Messiah Is Rampant and Dangerous

Trump keeps his base loyal by keeping them fearful. Through persistent fear-mongering, with messages like, “Illegal immigrants are murderers and rapists,” and “Islam hates us,” Trump gets to play the role of the great protector.

But there is another important reason why Trump loyalists do not waver no matter how he behaves or what scandals come to light. For most evangelicals, it is not only fear that keeps them in line, but it is also faith.

A significant portion of his supporters literally believe the president was an answer to their prayers. He is regarded as something of a messiah, sent by God to protect a Christian nation.

That kind of thinking is precisely why dangerous cult leaders are able to rise to prominence. Nothing good can come from putting any single person on a spiritual pedestal.

When you believe that someone is truly a godsend, you can excuse anything. It all becomes “for the greater good.” And when that happens, it is a slippery slope to gross abuses of power that continuously increase in magnitude.”
-Psychology Today


Millions of Evangelicals seriously believe that opposing Trump is the same as opposing God. 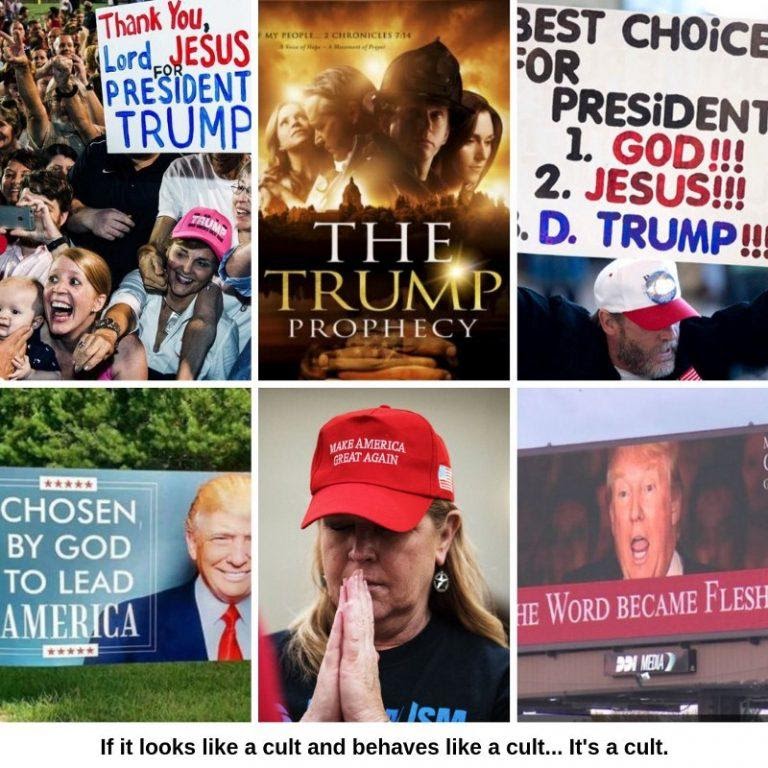 Donald Trump has promoted a claim that Jewish people in Israel love him like he is the “king” of the country and “the second coming of God”.
-The Independent


"I could stand in the middle of Fifth Avenue and shoot somebody and I wouldn't lose any voters."
-Donald Trump (video)


Be honest: if Trump shot Hillary, would you be upset? Or would you cheer? 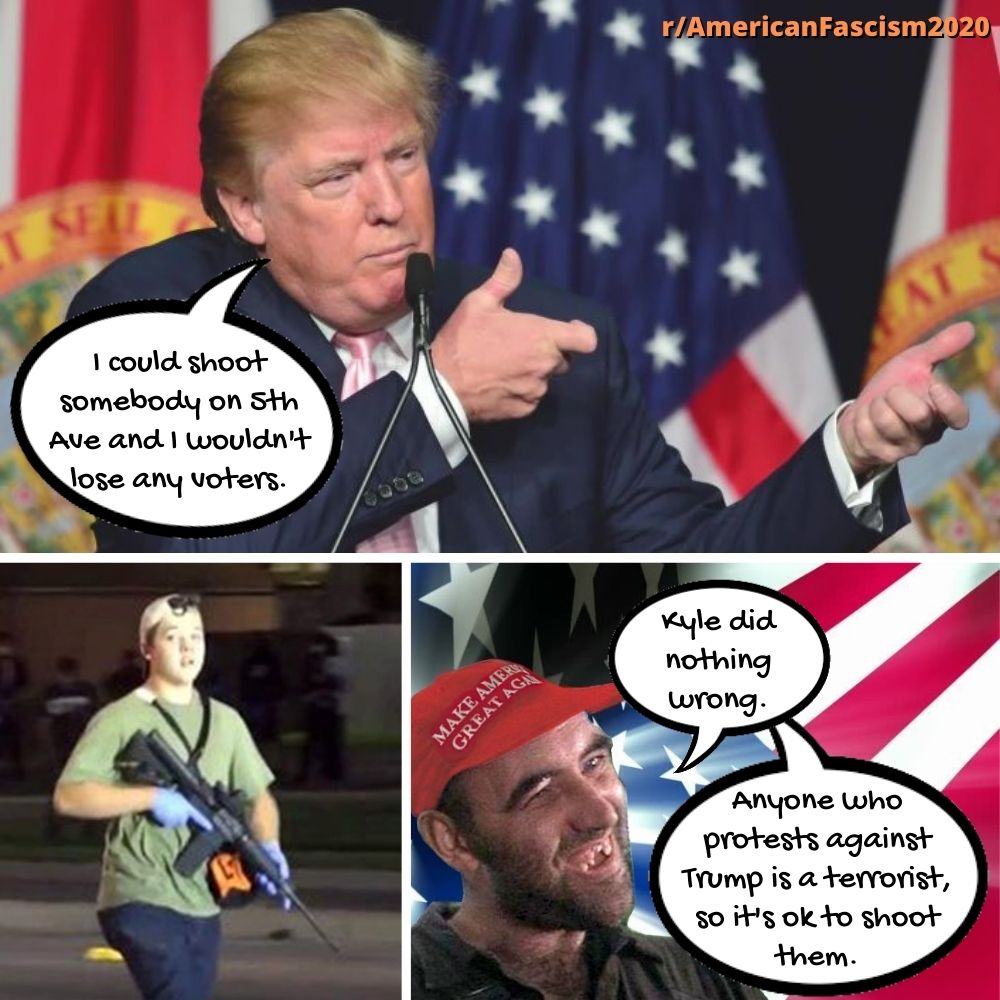