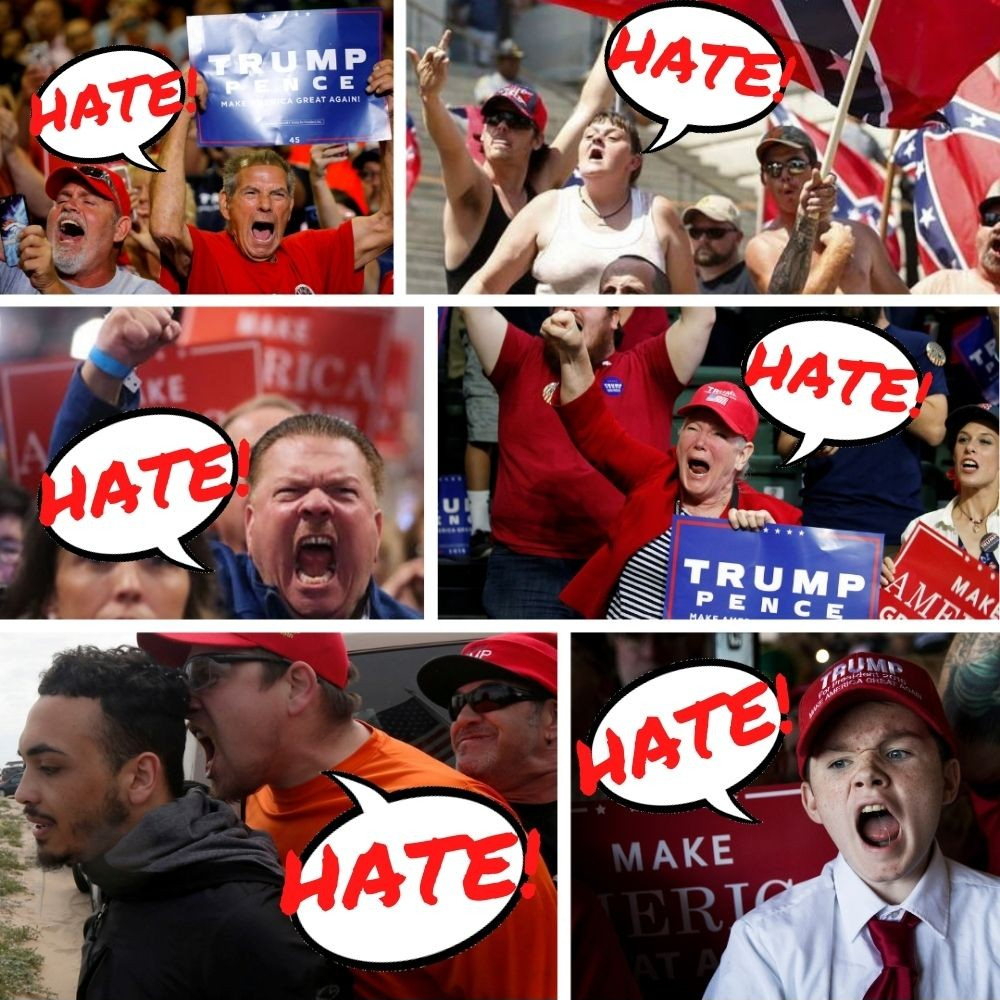 The hatred and disgust you feel for liberals are exactly the same feelings the Nazis felt for Jews.


“Trump encourages violence against reporters, and his supporters cheer

Anyone who watched Trump’s rallies during the 2016 election is well used to the fact that not only did the president regularly advocate violence, he talked about it with longing (“I’d like to punch him in the face”), lamented when protesters weren’t beaten sufficiently (“Maybe he should have been roughed up,” “Part of the problem, and part of the reason it takes so long, is nobody wants to hurt each other anymore, right?”) and instructed his followers to commit their own acts of violence (“If you see somebody getting ready to throw a tomato, knock the crap out of them, would you? Seriously, okay. Just knock the hell - I promise you I will pay for the legal fees, I promise”).

Just as important as the fact that Trump says these things is the response from his supporters. You can see it in the video: When he reminds them of the assault on Ben Jacobs, they laugh and cheer, exactly the response Trump anticipates.

Trump has an uncanny sense for where to find the worst in people, particularly people on the right: their fears, their resentments, their hatreds, the things that will move them to a venomous and gleeful rage.

He proved it in 2016 when every other Republican presidential candidate was dancing around the immigration issue and he busted in saying Mexican immigrants are rapists, build a wall, and ban the Muslims, which turned out to be exactly what the base wanted.

When you see Trump praising a violent assault committed by a Republican congressman to laughter and cheers, and at the very same rally pretending to be horrified that “The Democrats have truly turned into an angry mob,” you might wonder whether the assembled crowd notices their own hypocrisy. But they just don’t care.

Trump has instructed them that worrying about stuff like that is for wimps. Those who criticize him or even point out inconvenient facts - Democrats, journalists - are not just wrong, they’re enemies.


You use terms like liberals, libtards, demoncrats and demon rats as vicious slurs, to demonize and dehumanize liberals in exactly the same way Nazis demonized and dehumanized Jews.


'Less Than Human': The Psychology Of Cruelty

In Less Than Human, David Livingstone Smith argues that it's important to define and describe dehumanization, because it's what opens the door for cruelty and genocide.

"We all know, despite what we see in the movies," Smith tells NPR's Neal Conan, "that it's very difficult, psychologically, to kill another human being up close and in cold blood, or to inflict atrocities on them." So, when it does happen, it can be helpful to understand what it is that allows human beings "to overcome the very deep and natural inhibitions they have against treating other people like game animals or vermin or dangerous predators."

In addition to posing with the corpses, "these soldiers - called the 'kill team' - also took body parts as trophies," Smith alleges, "which is very often a phenomenon that accompanies the form of dehumanization in which the enemy is seen as game."
-NPR


To Hitler's Nazi minions, the word Jew was a slur that implied the worst of the worst: traitor, anti-German, anti-Christian, communist, evil, sub-human, baby killer.


Trump's MAGA minions use the word liberal with exactly the same intense hatred.


MAGA minions literally think about liberals the same way Nazis thought about Jews. They can’t wait for Trump to give the order to start shooting liberals. That’s the real reason why they’re stockpiling guns. To shoot their true enemy: liberals.


"Trump's border violence is sick entertainment for his fans: And they love it

Trump's supporters were thrilled by the tear-gas assault on migrants at the border. He has trained them well

Eliminationism is violence, usually encouraged by powerful social and political elites, against whole groups of people who are deemed to be "pollutants," "subhuman" or in some other way "inferior." Such language and values have been almost fully normalized in America under Donald Trump.

For several decades the right-wing echo chamber has told its followers (and the general public) that Democrats, liberals, progressives and any other group that Republicans and conservatives viewed as the enemy were to be vanquished and destroyed - literally.

This violent language is so commonplace that when Republicans and other conservatives use it, most critics, and the public as a whole, do not take the matter seriously. It is now the equivalent of background noise in America's public discourse.

Donald Trump encourages violence against his political enemies as a matter of routine. He has targeted nonwhite immigrants, refugees and migrants for eliminationist violence by calling them "snakes," "vermin," "invaders," "rapists," "criminals," "murderers," "terrorists" and human poison who only want to come to America to "breed" while also raping and killing white people.

Trump's language is not much different from the way the Nazis described Jews and other peoples they targeted for genocide. So it is not surprising that Trump and the right-wing media's encouragement of eliminationist violence has born lethal fruit.

Several weeks ago a neo-Nazi killed 11 Jewish people in a Pittsburgh synagogue because he was inspired by Donald Trump's anti-Semitic fear-mongering and conspiracy theories about a "caravan" of nonwhite immigrants from Latin and South America who were traveling to the United States in search of asylum.”
-Salon

One of Donald Trump’s favorite riffs is a wish, cast as a warning, that his supporters inside and outside the state security services will unleash violence on his political opponents if they continue to oppose the administration.

The specifics of the riff don’t vary much. Trump laments that his opponents are treating him unfairly, praises the toughness and strength of his supporters - a category that combines the police, military, and Bikers for Trump, which he apparently views as a Brownshirt-like militia - and a prediction that his supporters will at some point end their restraint.

He does it again in a new interview with Breitbart:

Christopher Paul Hasson, 49, of Silver Spring, Maryland, is alleged to be a white supremacist who had a hit list that included prominent Democratic politicians as well as several journalists from CNN and MSNBC.

US counties where President Donald Trump held a campaign rally saw a 226% increase in reported hate crimes compared to similar counties that did not hold a rally, political scientists at the University of North Texas said in a Washington Post analysis.

The scientists found that Trump's statements during the 2016 campaign "may encourage hate crimes" in the respective counties.

The study measured the correlation between counties that hosted a campaign rally and the crime rates in the months that followed.

Hate crimes in the US reportedly increased 17% in 2017 compared to the previous year, according to an annual FBI report published in November 2018.”
-Business Insider


'Only in the Panhandle': Trump chuckles when audience member suggests shooting migrants

President Donald Trump was tickled Wednesday when an audience member at a Florida rally suggested shooting migrants arriving at the U.S.-Mexican border.

Trump was bemoaning the legal protections afforded migrants and espousing the need for a border wall when he asked rhetorically, "How do you stop these people?"

"Shoot them!" someone shouted from the Panama City Beach crowd, according to multiple news media reports.

The remark drew a chuckle from the president, who shook his head, pointed in the audience member's direction and said, "Only in the Panhandle you can get away with that statement."

"Only in the Panhandle," he repeated to laughs and cheers from the crowd.”
-USA Today


There is blood lust in the air, at Trump rallies. Just ask the reporters who attend these frenzied hate fests and have to fear for their lives because of Trump's vicious mob. They're fanatics.


“At Donald Trump rallies, journalists are turning into targets - and that scares me

By tearing into the media at his raw-meat rallies, the candidate who has promised to pay the legal expenses of supporters prosecuted for violence is all but inspiring it. Now, as his behavior catches up with him, he’s even including the media in a “global” conspiracy against him.

A New York Times story late last week catalogued the “menacing, thunderous roar” when reporters come into a Trump rally. Acolytes “flipped middle fingers and lashed out in tirades often laced with profanity” as journalists made their way in.

What would it take for a rally to mushroom from threatening to dangerous to riotous? Only one spark, and Trump keeps lighting the match with incendiary indictments like, ”The media is, indeed, sick, and it’s making our country sick, and we’re going to stop it.”

You can simply say, “Man up,” but let me tell you about those beatings I suffered overseas. They didn’t start with a punch. They started with taunts. Which turned into shouts. Which evolved into pushing. Which morphed into punching.

Can the reporters covering Trump’s rallies feel secure that this won’t be the pattern there? It’s gotten so bad, evidently NBC and CNN have hired their own security to protect their people. NPR is giving Trump campaign correspondents “threat awareness training.” I have covered six different presidential campaigns, with candidates on both ends of the spectrum. It was never like this.

And you ought to be scared too.”
-Denver Post


“Cesar Sayoc, a fanatical Trump supporter with a lengthy list of convictions including a previous bomb threat, faces up to 48 years in prison on five charges relating to the mailing of 13 improvised explosive devices (IEDs) to the various targets, among them Barack Obama and Bill Clinton, the last two Democrats to occupy the White House.

Sayoc’s arrest by FBI agents on Friday at an auto parts store in Plantation, Florida, was the culmination of a week-long game of cat and mouse with a suspect some dubbed the “MAGAbomber”, in reference to Trump’s Make America Great Again campaign slogan and because the intended victims had all criticised and been verbally attacked by the president.

George Soros, the billionaire philanthropist and political activist, was the first to receive a bomb, in the mailbox of his suburban New York home on Monday. That was followed by Secret Service agents intercepting devices intended for the Obamas and Clintons.”
-The Guardian