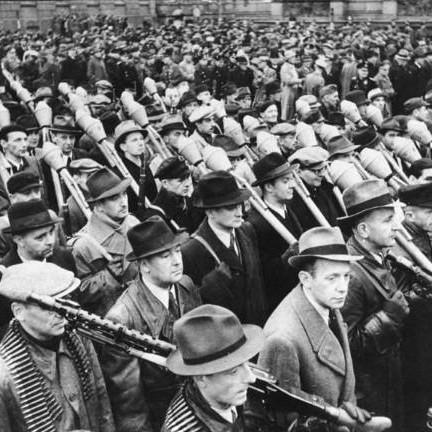 You know how those liars on Fox News always say the Nazis were anti-gun?

When the Nazis took power, they relaxed gun laws. The Nazis made it easier to own a gun, not harder. You didn’t even need a permit to buy a rifle anymore:


“The 1938 German Weapons Act, the precursor of the current weapons law, superseded the 1928 law. As under the 1928 law, citizens were required to have a permit to carry a firearm and a separate permit to acquire a firearm.

But under the new law:

Gun restriction laws applied only to handguns, not to long guns or ammunition.

The 1938 revisions completely deregulated the acquisition and transfer of rifles and shotguns, and the possession of ammunition.

The legal age at which guns could be purchased was lowered from 20 to 18.

Prior to the 1938 law, only officials of the central government, the states, and employees of the German Reichsbahn Railways were exempted.”
-Wikipedia


I know what you’re thinking: “But wait! The Nazis disarmed the Jews! That means they were anti-gun!”

No, no you wouldn’t. That’s why even today, in super pro-gun America, felons are not allowed to have guns. Because felons are considered dangerous enemies of the state.


In America today, millions of felons are not allowed to have guns because of a federal ban.


“Historians note that there were only around 214,000 German Jews left in the country by 1938, and therefore disarming the Jewish population didn’t have a larger impact on the Nazi’s continued assault on surrounding countries. In fact, suggesting that 214,000 people with personal firearms could successfully defeat the Nazis and all who colluded with them is “mind-bending,” according to the CEO of the Anti-Defamation League, Jonathan Greenblatt.”
-Forward


That’s a Jewish article about the Holocaust, published in a Jewish newspaper, written by a Jewish expert from a Jewish organization that deals with Jewish history. What I’m saying is, he knows what he’s talking about.


Today, right now, super pro-gun America is banning millions more people from owning a gun than Nazi Germany ever did. The Nazis were more pro-gun than America today.


The Nazis were very pro-gun and would looove the NRA. Every good German had a gun, to protect the homeland against evil barbarian hordes and evil globalist Jews.


Why would Fox News tell you that the Nazi Germans were anti-gun liberals, when that's a monumental lie, and the exact opposite of the truth?


Because you're being brainwashed, just like the Nazis were. Fascists use lies as a weapon.


Hitler was the first to weaponize radio broadcasts, which was cutting edge technology back then.


Trump uses Twitter, but Hitler was the first to brainwash people by using an early form of social media. Hitler sold millions of cheap radios (Volksempfaenger) to his followers. It was the iPhone and the Twitter of its day. It received only one station: Hitler's voice. That's how he filled his followers' heads with hateful lies about foreigners.

The network, which attracts more viewers than its two major competitors, specializes in fearmongering and unrelenting alarmism. Remember “the caravan”?

Fox, you might recall, was a welcoming haven for “birtherism” — the racist lies about President Barack Obama’s birthplace. For years, it has constantly, unfairly and inaccurately bashed Hillary Clinton.

And its most high-profile personality, Sean Hannity, is not only a close confidant of President Trump but appeared with him onstage at a campaign rally last year.

Fox News shouldn’t be treated as an honest broker of political news.

What Fox News has become is destructive.”
-Washington Post


"The bizarre political rise and fall of Infowars’ Alex Jones

Alex Jones has spent much of the past 23 years on the outskirts of political society, spreading conspiracy theories and lies.

With the rise of President Donald Trump, who has been described in media outlets as the “human distillation” of the conspiracy monger’s paranoid worldview, Jones appeared set to finally make it into the mainstream. But now, amid a global backlash against the chaotic forces Jones helped propel, the social media companies that fueled his rise may have closed him out for good.

“You have an amazing reputation. I will not let you down,” Trump told Jones in an interview from Trump Tower in December 2015.
-CNBC


“Dan Rather: With Twitter, Donald Trump Has "Most Powerful Platform For Propaganda" In Human History

This is a whole new age. And the president has the strongest, the most powerful platform for propaganda that humans have ever had. No president has ever had this kind of reach, the combination of television, radio, the internet, social media, tweets.”
-Real Clear Politics


"He Calls Hillary Clinton a ‘Demon.’ Who Is Alex Jones?

President Obama took a moment at a rally this week to sniff his hand to prove that he is not really a demon from hell who reeks of sulfur and walks the Earth swarmed by flies. Why would the president of the United States do such a thing, even in jest?

“I was reading the other day there is a guy on the radio who apparently — Trump’s on his show frequently — he said me and Hillary are demons,” Mr. Obama explained to the laughing crowd. “Said we smelled like sulfur. Ain’t that something?”
-New York Times


“How Fox News Created the War on Christmas

This isn’t to say that Fox hosts originated the idea of a war on Christmas. The term arose in the writings of anti-immigration activist Peter Brimelow in 1999 but languished until October 2005, when John Gibson appeared on The O’Reilly Factor to discuss his new book, The War on Christmas: How the Liberal Plot to Ban the Sacred Christian Holiday Is Worse Than You Thought.”
-Harvard Business Review


"In the big lie there is always a certain force of credibility. In the primitive simplicity of their minds they more readily fall victims to the big lie than the small lie, since they themselves often tell small lies in little matters but would be ashamed to resort to large-scale falsehoods.

It would never come into their heads to fabricate colossal untruths, and they would not believe that others could have the impudence to distort the truth so infamously. Even though the facts which prove this to be so may be brought clearly to their minds, they will still doubt and waver and will continue to think that there may be some other explanation.

For the grossly impudent lie always leaves traces behind it, even after it has been nailed down, a fact which is known to all expert liars in this world and to all who conspire together in the art of lying."
-Adolf Hitler 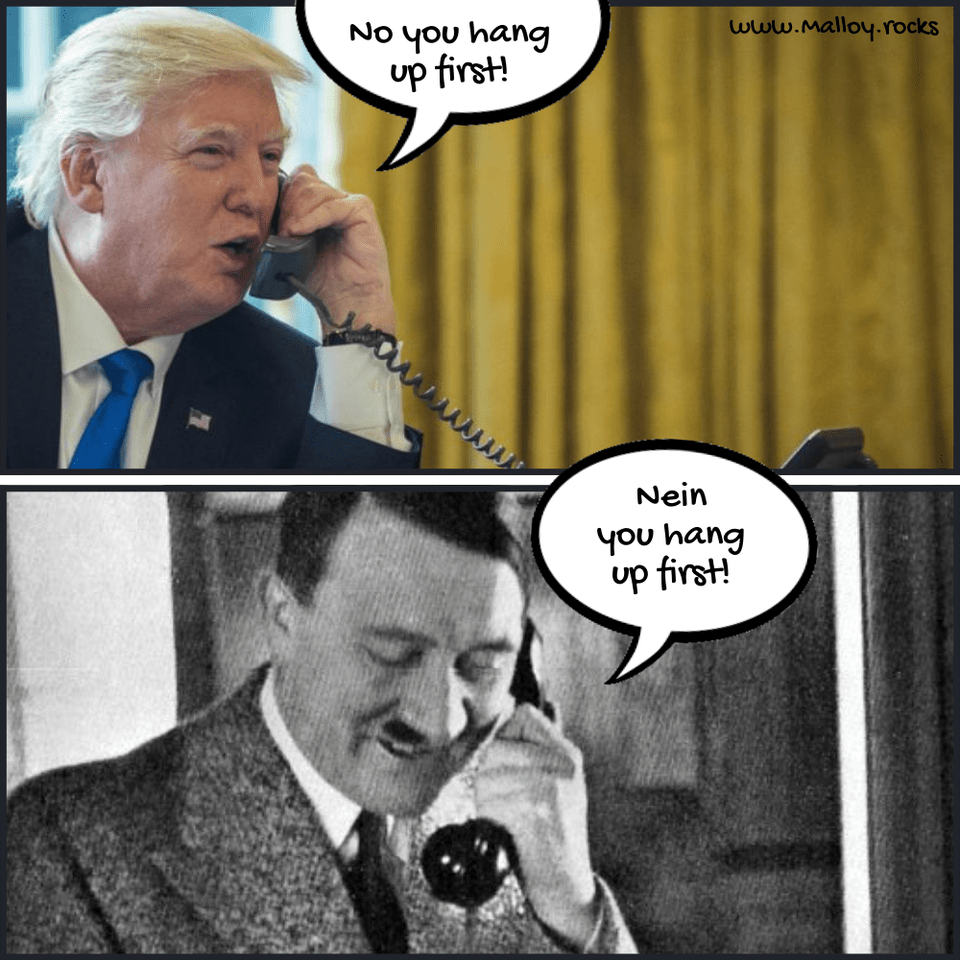 The fascist Trump cult is the biggest threat American democracy has ever faced:


As I explained in this short book, MAGA minions think of Trump as God's Chosen One, and think of themselves as God’s Christian warriors, and liberals as demons. Actual satanic demons from hell who smell like sulfur.

President Barack Obama sniffs his own hand at a campaign rally for Hillary Clinton in North Carolina on Tuesday, after Trump-supporting radio host Alex Jones said on Monday that Clinton and Obama are demons from hell who smell like sulphur”
-The Guardian


“If and when these preachers get control of the [Republican] party, and they're sure trying to do so, it's going to be a terrible damn problem. Frankly, these people frighten me. Politics and governing demand compromise. But these Christians believe they are acting in the name of God, so they can't and won't compromise. I know, I've tried to deal with them.”
-Barry Goldwater


“What is a Christian Warrior?

In the Bible, Christianity is compared to warfare. Indeed, it is a very real aspect of the way that those who follow Christ must live. Those who desire to live this way will face many battles—battles that MUST BE WON if we are to make it into the kingdom of God. There is effort involved—energy must be expended in the day-to-day life of a true Christian.

The reward—ETERNAL LIFE!—is well worth this effort. We dare not let this goal slip away.”
-The Restored Church of God


Good “Christian warriors" don't coexist with demons. They exterminate them.

The man who admits to killing three people at a Colorado Springs Planned Parenthood clinic last fall told police he dreamed he’ll be met in Heaven by aborted fetuses wanting to thank him for saving unborn babies, according to newly released court documents.”
-USA Today


And that's exactly what Trump's MAGA minions want to do. They don't just want to beat liberals in elections. They want to exterminate liberals. Like the Nazis tried to exterminate the Jews.


“The Far Right doesn't want to beat the Left; it wants to exterminate it

Every right-wing authoritarian movement has one thing in common: a brutal clampdown on any persons or groups who promote equality.

"There's a growing, rabid, conspiratorial anti-leftism on the right. That anti-leftism has been metastasizing for decades, and it has a growing body count. Yet the right's hatred of and violence against people on the left is rarely treated as a trend by the media.

The rhetoric on the right over recent decades is disturbing. Right-wing pundits have joked about murdering people on the left for years. In the 1990s, talk-radio host Rush Limbaugh quipped, "I tell people: 'Don't kill all the liberals. Leave enough so we can have two on every campus—living fossils—so we will never forget what these people stood for.'"

His words were echoed recently by the neo-Nazi Chris Cantwell, who ranted in a Gab post that leftists should face "complete and total destruction."

Adolf Hitler's prejudice against Jewish people is widely understood and condemned today. But his parallel and rabid hatred of leftists is less frequently broached in popular discussions of the Second World War. Yet the two hatreds were deeply intertwined. The scholar Robert Paxton has noted that fascism was distinguished specifically by "an anti-liberal, anti-socialist, violently exclusionary, expansionist nationalist agenda." 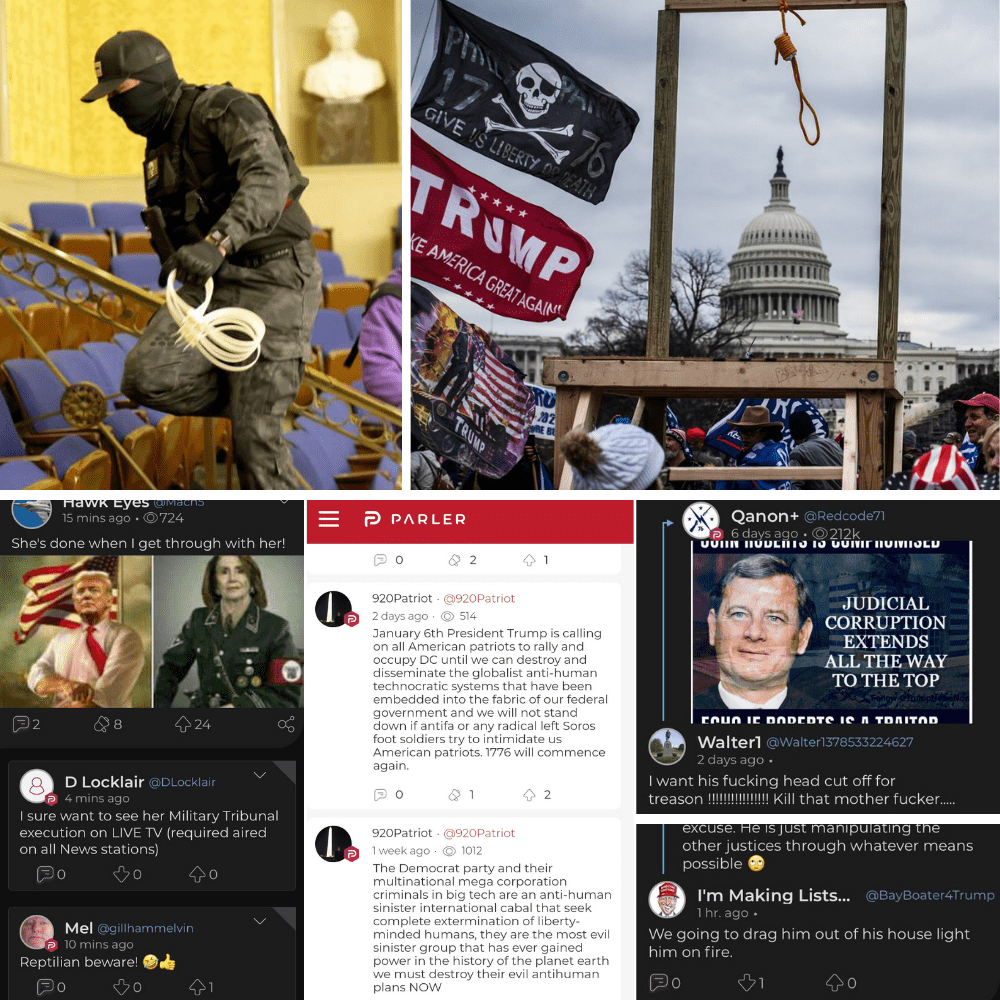 Tell a friend about this book: