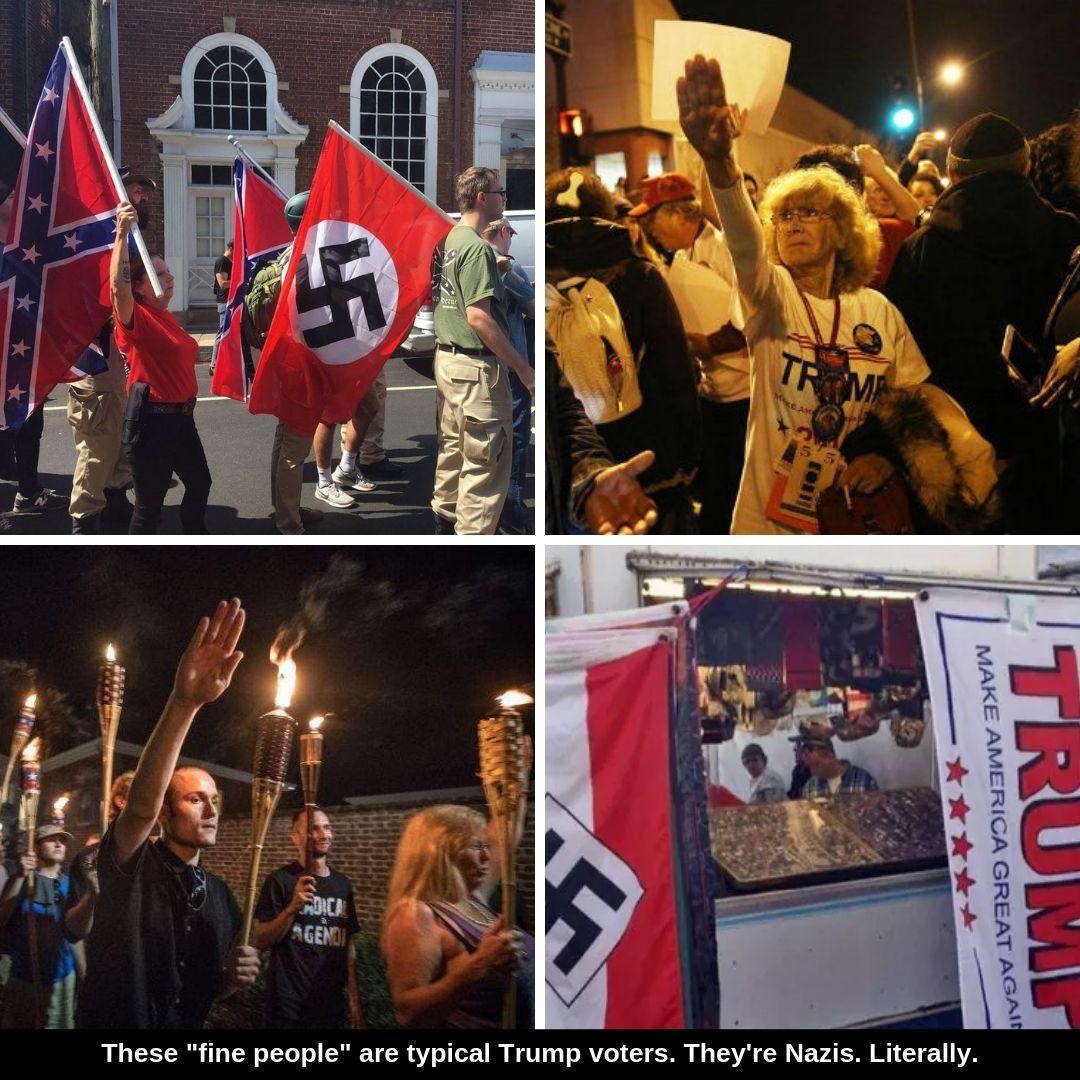 The Nazis didn't think of themselves as racists. Neither do you:


“Republicans’ Race War Predated Trump. And It May Outlast Him.

Their resentments are key to the party’s identity.

When a political party endorses lies, year after year, in full defiance of the fact record, and its members convince themselves that the lies are so justified by circumstance as to be practically true, there is something powerful - and very dangerous - at work.

The alleged mass killer at a Pittsburgh synagogue is said to have acted on a belief that a caravan of immigrants was coming north, under the guidance of nefarious Jews, to overrun white people in the U.S. His action, a racist mass murder, was monstrous. Yet the belief that appears to have inspired him is only a slightly more paranoid variation on the theme described by Ayres, and very closely linked to one echoed by the GOP’s white-nationalist-in-chief.

By this reasoning, the nonwhite citizens who are “in the tank” for Democrats are similar to the alien horde pressing toward the nation’s vulnerable “open” gates. The alien inside and the alien outside are twin elements of the Democrats’ effort to multiply Democratic votes.

In effect, the conspiracy theory about Barack Obama’s birth, openly promulgated by Donald Trump, wasn’t a mark of Obama’s rarefied status. It’s a reusable template, casting virtually all nonwhites beyond the pale even when they’re born inside it.”
-Bloomberg


The Nazis thought they were the victims. So do you:


“75 Percent of Republicans Say White Americans Are Discriminated Against

The victimization of white America put forth by conservatives and right-wing media has taken hold, according to the results in a new poll from Hill-HarrisX. A whopping 75 percent of registered Republican voters said that white Americans face discrimination.

Interestingly, only 19 percent of white respondents said they personally faced racial discrimination, proving the point that the fear tactics of Fox News and other conservative media who sell the myth of “reverse racism” are working.”
-Rolling Stone Magazine


Nazi Germans honestly believed that non-Germans, non-whites and non-Christians were their mortal enemies and bad, evil people. You believe the same thing:

“The GOP is the party of Islamophobia

Republicans were always going to come for Rep. Ilhan Omar.

From the moment the Minnesota Democrat was elected to Congress as one of the chamber's few Muslims — and a hijab-wearing Muslim, to boot — her destiny was fixed. Republican conservatives were always going to paint her as the enemy, depict her as un-American, and find some way to smear her with the 9/11 terror attacks on America.

Now, the ugly din has grown so loud that Omar finds herself needing physical protection.

This sad debacle was inevitable. We should have seen it coming. Why? Because the GOP is the party of Islamophobia — and it is led by the sort of folks who see themselves in a "clash of civilizations" with one of the world's largest religions.

Conservatives have been campaigning against Islam — not just the religion's extremist adherents, but the religion itself — ever since 9/11. They've questioned the loyalty of Muslim Republicans. They've tried banning Muslim refugees from entering the United States. In communities across the country - from New York to Tennessee to California - they've taken extraordinary steps to block the construction of Muslim houses of worship. Some have even contended that Islam is not a religion, but an authoritarian ideology. Over the years, some conservatives - including Trump during his campaign days - even falsely suggested that President Obama was a secret Muslim and in league with terrorists.

Omar is just the latest target for their ongoing campaign.”
-The Week

When the Nazis used vicious slurs against “evil people,” the Nazis didn't think they were doing anything bad or racist. They honestly believed the hateful things they said about Jews.

Just like you believe the hateful bullshit you repeat about muslims, immigrants, and liberals. Here are some quotes of InfoWars lies about Hillary:

Hillary Rodham Diane Clinton is one of the high priests, a goddess of this occult, satanic, shadow group.