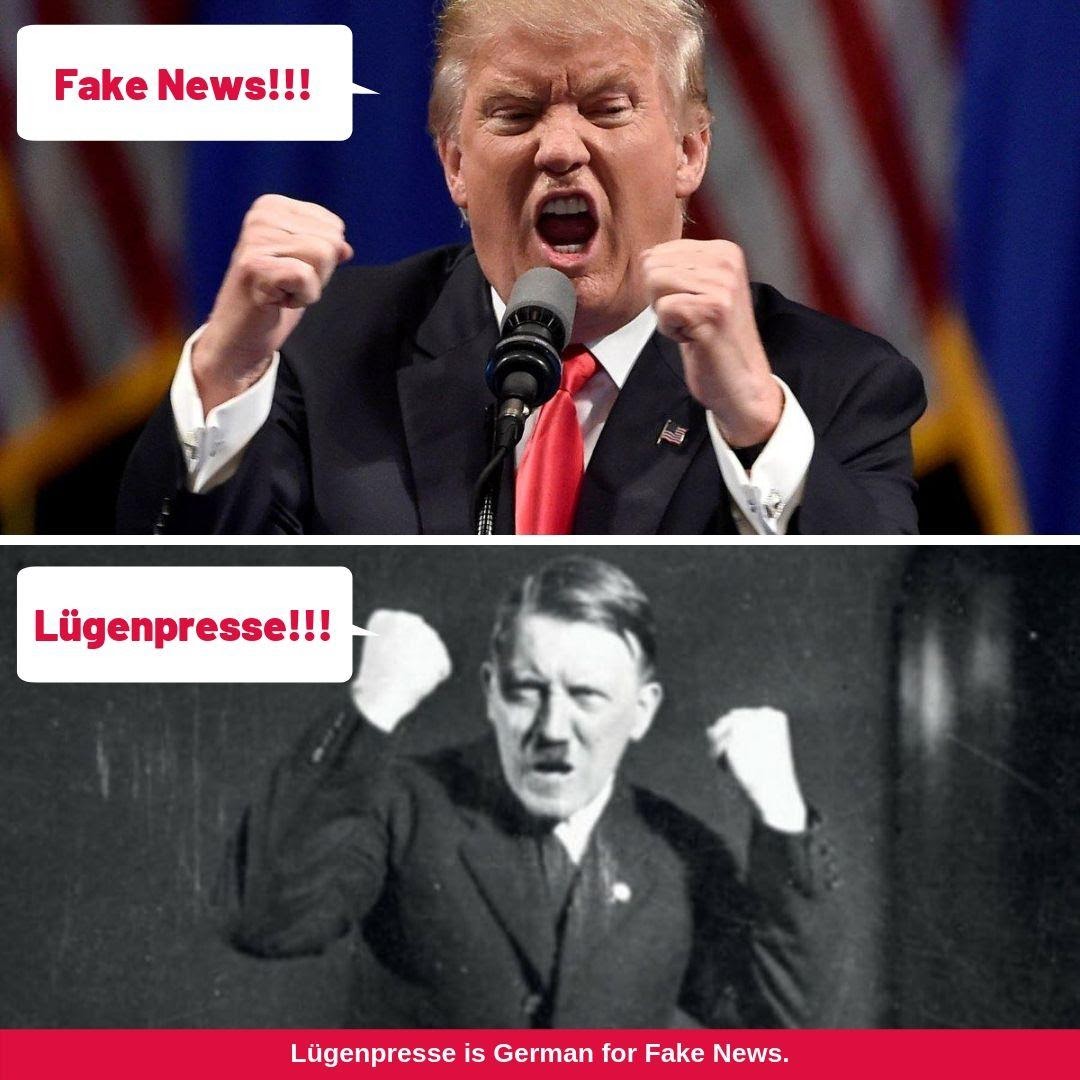 
Whenever the press unmasked Hitler and exposed that he was not a messiah but a monster, Hitler called them Lügenpresse, which is the German version of Fake News.


“Trump, the "lying press" and the Nazis: Attacking the media has a history

Donald Trump's attacks on "the enemy of the people" aren't random outbursts. They have a long and troubling history

At an election rally in Cleveland in October 2016, two supporters of Donald Trump were captured on video shouting, “Lügenpresse!” What was going on? Why would people who are looking to Trump to “Make America Great Again,” be shouting a German word at one of his events? And what did it mean? The “lying press” - an idea at the heart not only of Trump’s campaign and presidency, but of his entire worldview.

As it turns out, the use of the term Lügenpresse happens to be quite illuminating. It sheds light on a connection between Trump’s political approach and that of Hitler in the 1930s, when one also heard that word used quite often.

If the press was critical of the Nazis, the explanation was clear: the Jews. And since, according to Hitler, Jews were fundamental enemies of Germany, the press, too, was the enemy of the people.

As with so much of Nazi propaganda, the description of an opposition press based on lies was a classic case of projection. Hitler based his whole approach to politics on lies - something he made no secret of, having described his strategy of the “Big Lie” in his memoir, "Mein Kampf."

Hitler lied to officials about his party’s use of violence, he lied about his own past, he lied to foreign leaders about his intentions, and, of course, his whole understanding of the world was based on the lie of a global Jewish conspiracy. Truth would never get in the way of Hitler’s goals.

Trump is also a man who has never let the truth get in the way of what he wants to say and who projects his own dishonest nature onto others. And like Hitler, he’s made no secret of the fact that he lies - bragging to a group of Republican donors that he simply made up numbers to argue about trade policy with the Canadian prime minister.

Once in power, Hitler continued his campaign against the Lügenpresse. On the one hand, he had the newspapers of his main political opposition - the Communists and Socialists - forcibly shut down. In doing so, the police arrested many of the editors and sent them to concentration camps.

Beyond purging the press of “Jewish and Marxist” journalists, the Nazis often took over the facilities and equipment in order to publish their own papers, and with them, their own version of reality.”
-Salon


“Donald Trump borrows from the old tricks of fascism

The governing principle of the Trump administration is total irresponsibility, a claim of innocence from a position of power, something which happens to be an old fascist trick.

As we see in the president’s reactions to American rightwing terrorism, he will always claim victimhood for himself and shift blame to the actual victims. As we see in the motivations of the terrorists themselves, and in the long history of fascism, this maneuver can lead to murder.

The Nazis claimed a monopoly on victimhood. Mein Kampf includes a lengthy pout about how Jews and other non-Germans made Hitler’s life as a young man in the Habsburg monarchy difficult. After stormtroopers attacked others in Germany in the early 1930s, they made a great fuss if one of their own was injured.

The Horst Wessel Song, recalling a single Nazi who was killed, was on the lips of Germans who killed millions of people. The second world war was for the Nazis’ self-defense against “global Jewry”.
-The Guardian 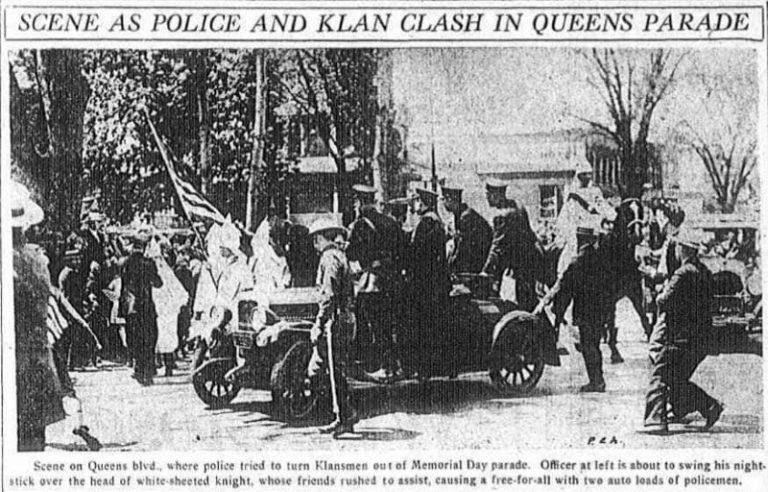 "The Trump Family’s History With the KKK

Fred Trump, the president’s father, was arrested as a young man at a Klan march in New York City. Historian Linda Gordon explains - her new book is The Second Coming of the KKK: The Ku Klux Klan and the American Political Tradition.”
-The Nation

1973: The US Department of Justice - under the Nixon administration, out of all administrations - sued the Trump Management Corporation for violating the Fair Housing Act. Federal officials found evidence that Trump had refused to rent to black tenants and lied to black applicants about whether apartments were available, among other accusations.”
-Vox


“In 1927, Donald Trump’s father was arrested after a Klan riot in Queens

When he was asked on CNN's "State of the Union" on Sunday whether he would condemn the praise of former Ku Klux Klan grand wizard David Duke, Donald Trump declined to disavow Duke's comments. 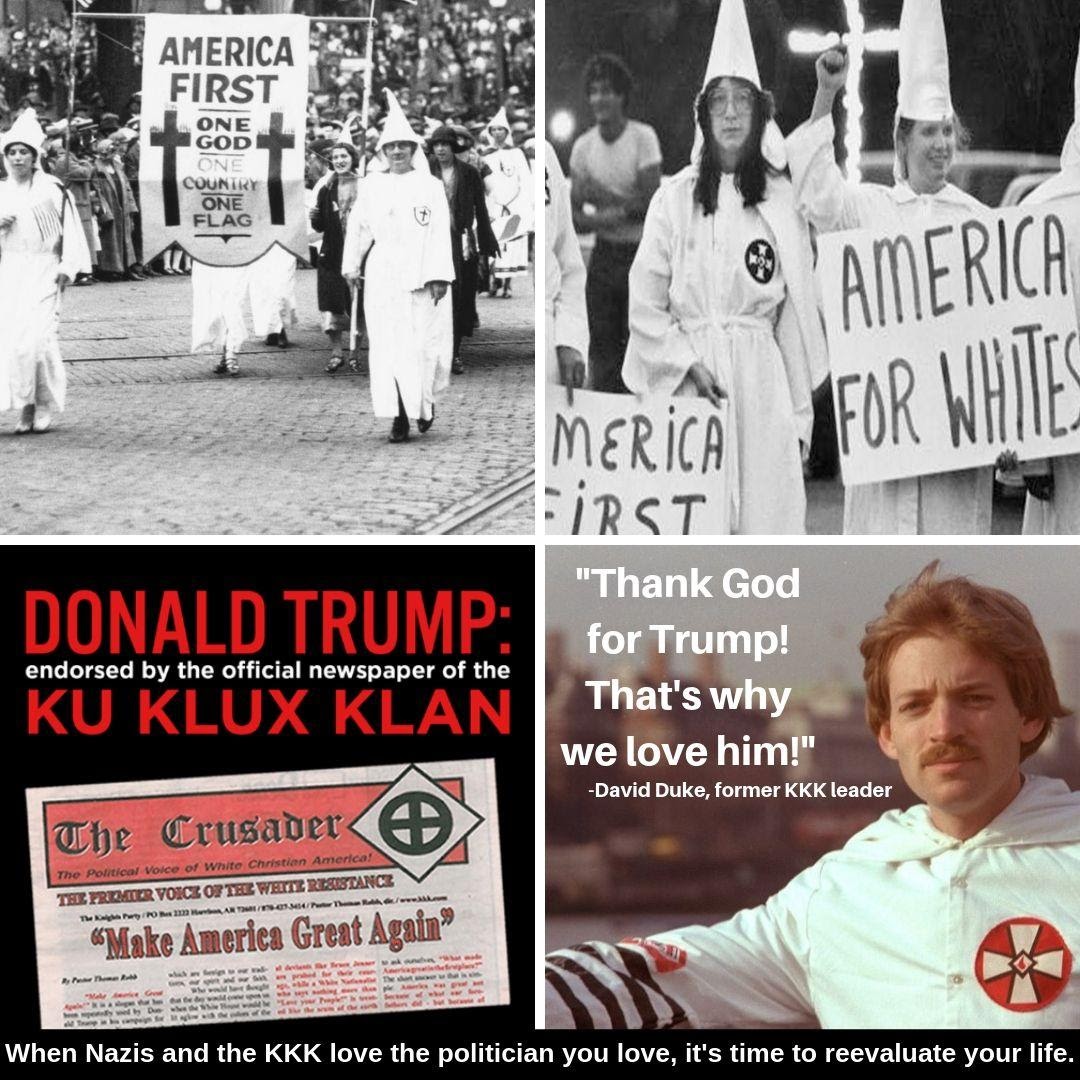 In the US, video has emerged of far right activists celebrating Donald Trump’s victory with what appear to be Nazi salutes.

It happened at a conference in Washington of the alt-right – a radical group that has dramatically risen in prominence in the last year.”
-BBC News 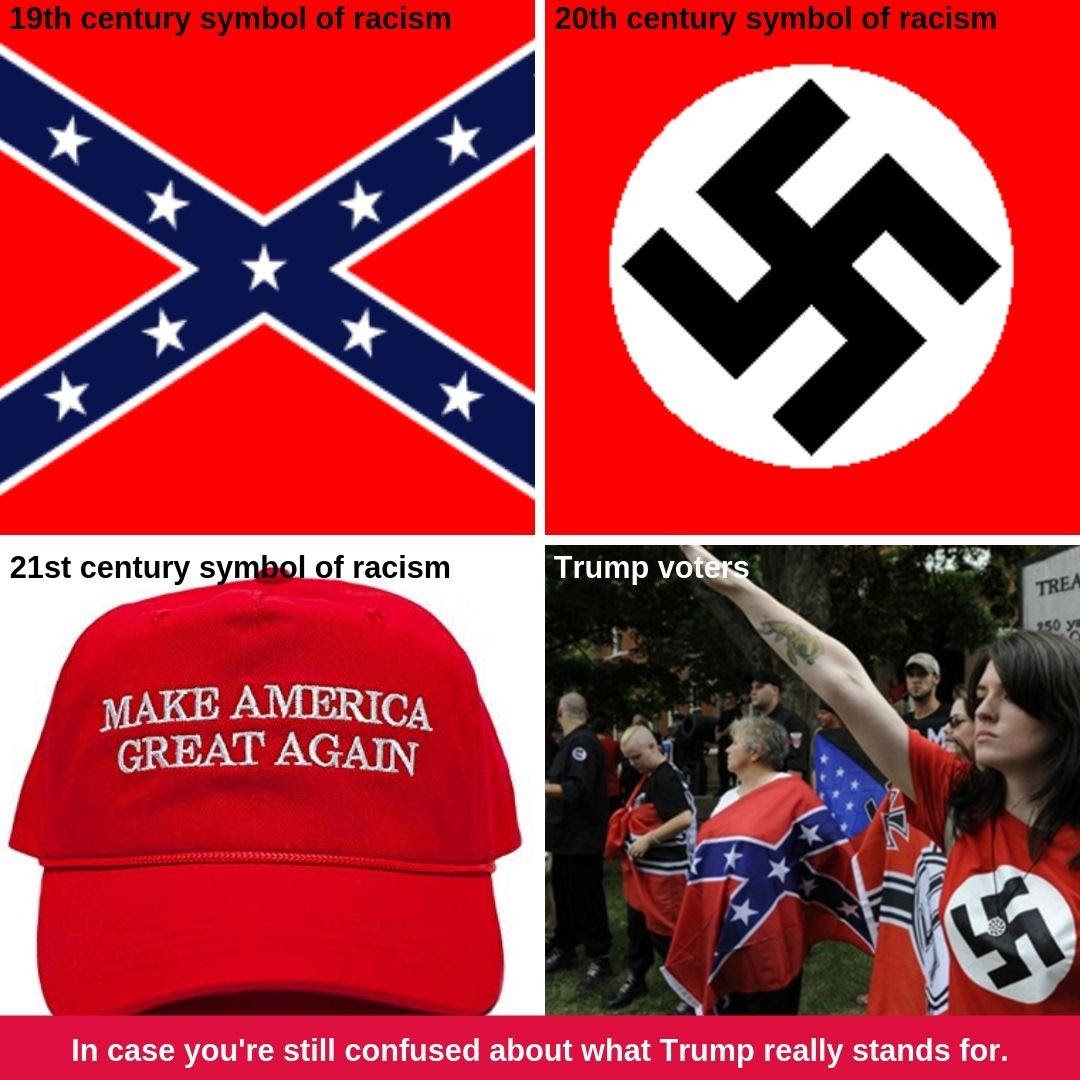 The KKK are hardcore racists. Racism guides every aspect of their lives.

Is any of this sinking in yet?

Or do you need more time?

Take all the time you need.