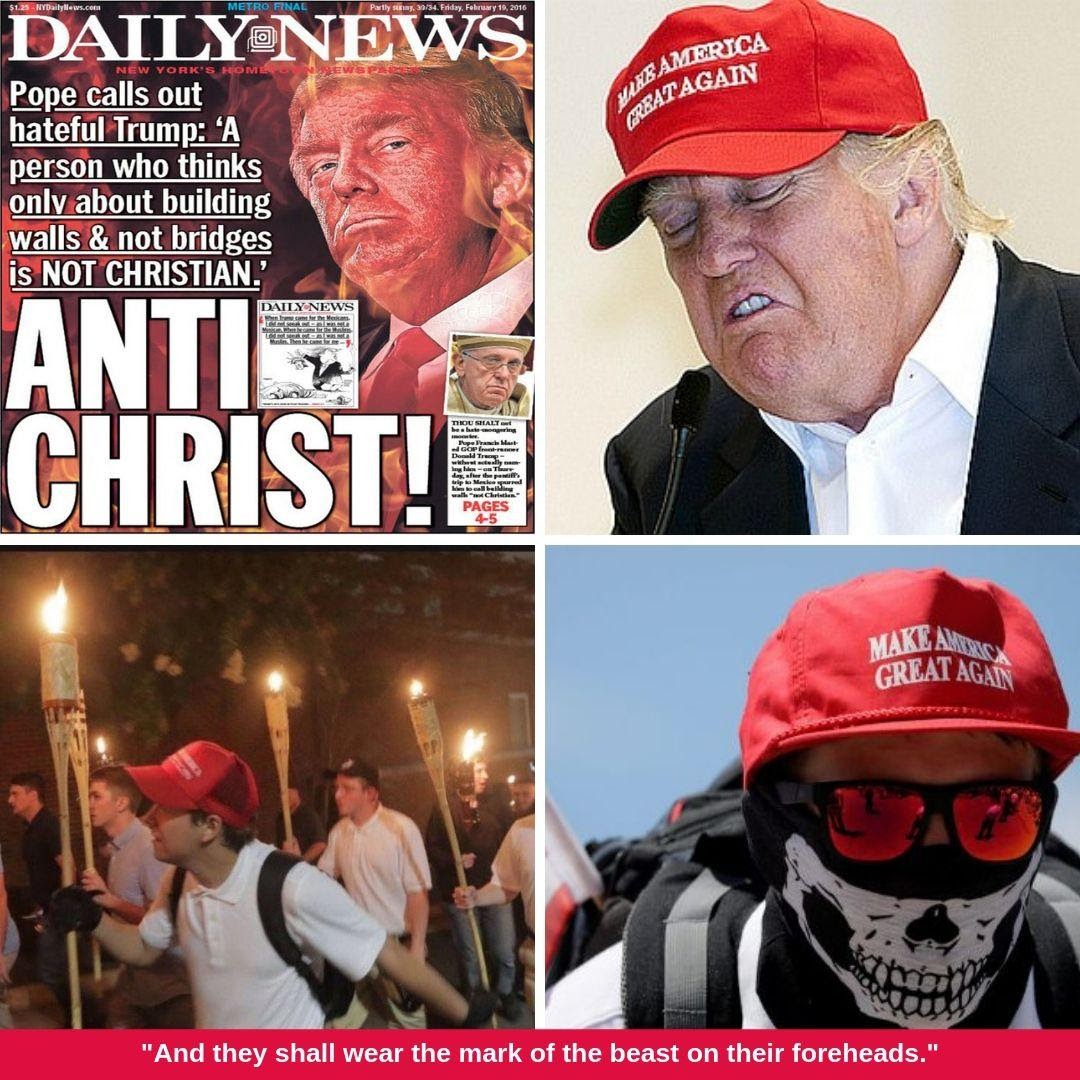 Under Trump, children keep dying in US custody. That never happened under Obama.


"Why are migrant children dying in U.S. custody?

At least seven children are known to have died in immigration custody since last year, after almost a decade in which no child reportedly died while in the custody of U.S. Customs and Border Protection.


Nobody likes to abandon their home and walk a thousand miles through danger, towards an unknown future. That is not a journey anyone makes lightly. Especially not with a baby on your arm. These desperate people are coming here because they need our help, not because they are a threat.

It’s every real Christian’s duty to help them.

Even if Christians struggle to recognize him with his "torn clothes (and) dirty feet," Jesus is present in the migrants and refugees who seek safety and a dignified life in a new land, Pope Francis said.

If Jesus' words, "Whatever you did for one of these least brothers of mine, you did for me," are true, the pope said, then "we must begin to thank those who give us the opportunity for this encounter, namely, the 'others' who knock on our doors, giving us the possibility to overcome our fears in order to encounter, welcome and assist Jesus in person."
-National Catholic Reporter


40 "The King will reply, 'Truly I tell you, whatever you did for one of the least of these brothers and sisters of mine, you did for me.'

41 "Then he will say to those on his left, 'Depart from me, you who are cursed, into the eternal fire prepared for the devil and his angels.

44 "They also will answer, 'Lord, when did we see you hungry or thirsty or a stranger or needing clothes or sick or in prison, and did not help you?'


“Religion and refugees are deeply entwined in the US

The idea of welcoming the stranger is central to Christianity, Judaism and Islam. It originally arose from cultures born in deserts where leaving someone outside the city gates could be a death sentence. Religious leaders of those faiths often connect that ethic to a responsibility to shield refugees and other immigrants from violence and oppression.”
-The Conversation


The refugees are not evil, not terrorists, not gang members, not criminals, not rapists, and not animals, despite what Trump says. In fact, immigrants commit less crimes than people born in America.


“Trump ramps up rhetoric on undocumented immigrants: 'These aren't people. These are animals.'

“We have people coming into the country or trying to come in, we're stopping a lot of them, but we're taking people out of the country. You wouldn't believe how bad these people are," Trump said.

"These aren't people. These are animals."
-USA Today

The fact of the matter is that a significant portion of our society just wants to believe the worst about immigrants.

It's been well documented in studies going back nearly a century that the foreign-born are involved in crime at significantly lower rates than their U.S.-born peers.”
-Chicago Tribune


But that's not what Trump and Fox News tell you, is it?

No, they keep telling you that brown people are evil, and they're coming here to kill you and exterminate the white race.

It's not true. It's a racist lie. The same type of lie Hitler used against Jews.

You probably didn't know this either, but the brown kids Trump locks in cages are Christian kids. All those refugees at the southern border are Christians, not Muslims. (Not that it should matter, but it's the truth, and I'm making a point.)


“God will decide if we make it

Despite Trump’s claims of criminals and ‘Middle Easterners’, the migrants heading north through Mexico tell of lives made impossible by gangs, violence, poverty and corruption”
-The Guardian

The scene inside the Clint, TX, center would 'break your heart', according to attorney Warren Binford, who is part of a group of experts that monitors children in government custody.”
-MSNBC

No, Obama didn’t. Trump and Fox News are just lying to you, as usual.

President Donald Trump, in an interview with the Spanish-language TV network Telemundo, adamantly claimed that the separation of immigrant families at the border during his presidency happened because of an Obama policy. That’s not true.

The controversial family separations under Trump’s watch happened as a result of a new policy introduced in April 2018 by Trump’s then-Attorney General Jeff Sessions.


Trump is constantly lying to you. Even about the Christian children he’s persecuting and locking in cages.

And like some deranged suicide cult, you're cheering for it. The MAGA cult actually wants the world to end.


#RaptureAnxiety calls out evangelicals' toxic obsession with the end times

From Trump’s Jerusalem decision to Roy Moore’s campaign, this week has triggered many evangelicals’ anxieties about the apocalypse.

A deluge of news in recent weeks, including the contentious election involving evangelical judge Roy Moore and President Donald Trump’s decision to move the US embassy to Jerusalem has quite a few evangelicals on edge.

Many are taking to Twitter to process their thoughts through the hashtag #RaptureAnxiety, which explores the many ways in which evangelicals have experienced anxiety or trauma around narratives of the “rapture.” An anxiety that includes other harbingers of the “end times” associated with a particular strain of American evangelical Christianity.

Ideas about the “Rapture” are rooted in a quintessentially American form of evangelical Christianity.

Christian traditions have varying understandings of the end of the world, rooted in different interpretations of the Bible (in particular, the book of Revelation). The narratives around the “end times” and the “rapture” are largely an American phenomenon.”
-Vox


“Trump will start the end of the world, claim Evangelicals who support him

Evangelical Christians overwhelmingly support President Donald Trump because they believe he'll cause the world to end.

Many evangelical Christians believe that Trump was chosen by God to usher in a new era, a part of history called the "end times." Beliefs about this time period differ, but it is broadly considered the end of the world, the time when Jesus returns to Earth and judges all people.

Evangelicals believe that a unified Israel with control over Jerusalem will facilitate the construction of a new Jewish temple, and set the groundwork for the end of times.

"What kick-starts the end times into motion is Israel's political boundaries being reestablished to what God promised the Israelites according to the Bible," Nate Pyle, a pastor and author of a book about Jesus, told Newsweek.”
-Newsweek


MAGA is a death cult.

That's why you have no interest in stopping the Climate Apocalypse while literally every other country on the planet is trying to prevent it.


“The Climate Apocalypse Is Now, and It’s Happening to You

74 percent of women and 70 percent of men believe climate change will harm future generations of humans, but just 48 and 42 percent, respectively, think it’s harming them personally.

It is, of course, in lots of ways. Yet fewer than half of Americans think climate change is a right-here, right-now problem. So it’s critical that a new report on the impact of climate change is about the present as much as the future.

The topline results: 157 million more people experienced a heat wave in 2016 than in 2000—12.3 million Americans. That heat and the injuries that can come from it cost the world 153 billion hours of labor—1.1 billion in the US. The geographic range of the mosquitoes that carry dengue fever, Zika, malaria, and chikungunya is spreading. So is the range of the bacterium that causes cholera. Global crop yield is going down.”
-Wired Magazine

War-torn Syria just announced they will sign the Paris Agreement, leaving the United States as the only country on Earth that hasn't signed the agreement to tackle climate change.

In the past month, two out of the three countries left in the world who hadn't signed the Paris Agreement have joined the rest of the world. That includes Nicaragua signing the accord last month, which held out for stronger emission reductions than the Paris Agreement targeted. The other country, Syria has been under civil war since 2011 and still prioritized signing the agreement amidst the internal fighting.

The United States now stands alone in the world as the only country to reject the Paris Agreement. The agreement even includes North Korea, which despite being against the rest of the world on practically every other issue, has decided that this is bigger than all of us and requires a global response.”
-Forbes


The unprecedented European heatwave in 2003 killed at least 35,000 people:

At least 35,000 people died as a result of the record heatwave that scorched Europe in August 2003, says an environmental think tank.

The Earth Policy Institute (EPI), based in Washington DC, warns that such deaths are likely to increase, as “even more extreme weather events lie ahead”.

France suffered the worst losses, with 14,802 people dying from causes attributable to the blistering heat. This is “more than 19 times the death toll from the SARS epidemic worldwide”, notes the EPI.
-New Scientist Magazine


Year after year, the world is getting hotter. As I write this, Europe is in the midst of another, even worse, unprecedented heatwave. Yesterday France recorded the highest temperature ever: 113 degrees.


“France Suffers Through Hottest Day In Its History — 113 Fahrenheit

Météo-France, the national weather service, issued its highest warning level for four regions of the country.

French Prime Minister Édouard Philippe described the heat as "exceptional in its precocity and intensity," saying government preparations were not an overreaction but a necessity.

Some 4,000 schools closed for the day out of concern for children's safety, he said. As part of emergency heat wave plans, public cooling rooms had opened in Paris and other cities, and parks and pools stayed open for extended hours. Parisians could also use a smartphone app to find places to cool down.”
-NPR


That is insane. The world is on fire.


“By the numbers: Unprecedented devastation of California's wildfires

There is a trend, driven by climate change, decades of fire management policies and human development, toward larger fires in California. Heat is a big factor in these fires.

California had its hottest month on record in July, with average temperatures at 5°F above the 20th Century average. Death Valley, California, set a record for the hottest month of any location on Earth, NOAA found.

Out of the top 20 largest wildfires in California history, only one occurred before 1950.

All of the top 10 largest wildfires have taken place during the past decade, with four out of the top 5 occurring since 2010.”
-Axios News


Instead of following Christ's teachings, and helping those in need, the deranged MAGA death cult cheers when Trump persecutes brown Christian refugees from Latin America, and watches the world burn.